Okay, no real relation to The Cars lyrics here.

But things are shakin’ in the East Valley of Phoenix.

Shake Shack is opening in Gilbert next week.

This contains no relevance in my life whatsoever.

I’ve never been to a Shake Shack (despite being a hamburger lover), though I’ve long been aware of its existence. One day perhaps.

This impending arrival brings to 5 the number of Shake Shacks in Arizona. So it’s big news here.

It’ll do wildly well in this new location in a humongous outdoor mall in Gilbert, which is the fastest-growing suburb of Phoenix. It is exploding.

It’s not that Shake Shack’s coming to my general area that makes it blog-worthy, rather what’s coming with it.

People began lining up 4 days in advance! They camped on the sidewalk — you can do that in sunny Phoenix winters where it’s like 70 degrees in the day, 46 at night (21/8 C).

People arrive by the hundreds even thousands.

The really hard-core fans travel around the country just to attend opening days.

Who but the Rolling Stones or the Lord could generate such groupies?!

Here’s a pic of the White Castle opening.

Note: This is merely a fraction of the crowd. Only an aerial shot could capture the whole of it! 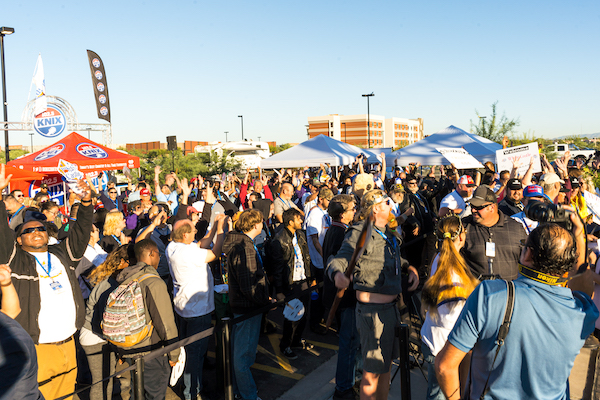 The people may change but the numbers won’t when Shake Shack opens its doors in Gilbert next week.

MASSIVE crowds not only on opening day but well into the first months of operation are a given.

This phenomenon: I do not understand.

My deep aversion to crowds prevails. Ditto my common sense and reasoning.

I mean, if, say, a new iPhone were being sold on the cheap, I could understand, kinda sorta.

It doesn’t contain nuggets of gold. There ain’t $100 bills in place of lettuce or a key to a Corvette tucked in a patty for some lucky customer.

Precedent predicts that SanTan Village in Gilbert will NOT BE THE PLACE TO BE next Wednesday!

Oh, I nearly forgot. The first 100 customers in line when the doors open at 11 a.m. will take home a free Shake Shack State Forty Eight T-shirt.

I’ve no idea what that shirt even means.

Dollars to donuts a thousand people at least will be able to enlighten me however!

So things are shakin’ in the East Valley of Phoenix.

I’ll be reserving my shakin’ for martinis in the quietude of my home, thankyouverymuch.

Folks in Snow Country may understandably call this paradise. I call it purgatory, sort of.

Traipsing about in flip-flops in January feels absurd.

Ditto having my windows wide open to let in spring-like sunshine and air.

I’m an earthy seasons-attuned hippy barefoot sorta girl. And my body’s shouting: What the fuck?!?

Body and psyche innately keep reaching for that reset button of reflective winter … that rhythm of the seasons.

And they keep coming up empty-handed. ‘Cause they ain’t there!

I’ve lived in places with four distinct seasons. I felt at home, on point, in tune, in sync with nature. Fulfilled.

Southern Arizona, like Phoenix, has whacked out my inner compass that naturally points to the Four Directions and Four Seasons.

That compass is erratically madly spinning as if I’ve landed in the Bermuda Triangle.

I miss snow and blizzards — though I wouldn’t wanna live in ’em.

I miss cloudy gray skies — though I absolutely wouldn’t return to the Pacific Northwest!

Believe it or not, you can actually tire of blue sunny skies! … the redundancy … the boredom.

Drink the same brand every day every month every year and the palate loses its ability to discern. It needs variety to keep it sharp, informed and on point, otherwise it sinks into the slumber of boredom.

Variety IS the spice of life. And necessary.

I’ve written it before but it bears repeating.

Yet there shall be no gloating, no “read it ‘n’ weep” aimed at folks in winter from these quarters.

I envy your biting cold and white stuff and dynamic skies and, yes, the use of a furnace!

Early January and I’ve yet to turn on the heat in my studio. But you can bet that air-conditioner’s gonna be up and running way too soon and long!

The holidays are past so I can’t say I’m dreaming of a white Christmas.

Here in weirdly warm Phoenix, I’m dreaming only of styrofoam pretending to be snow spread across my floor. 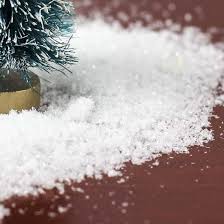 There’s no denying these pleasant comfortable conditions — best of the year and oh so very attractive to snowbirds from around the northern continent — including you, Canada!

Best time of year to be in southern Arizona

While I could justifiably gloat “read it and weep” to much of the country shivering in snow and below-freezing temps, I don’t.

Why? ‘Cause while I can’t deny its pleasantness, I don’t like this weather!

Dead of winter. I should have traded in my flip-flops for socks and New Balance sports shoes by now!

Should be wearing a heavy coat rather than lightweight sweatshirt jacket — or simply a flannel shirt.

Should have my tiny studio sealed up with a heater running rather than windows wide open at 7:15 at night!

I should be sitting here with at least warming slippers rather than bare-footed, for god’s sake!

Yes, both my natural earthiness and Nordic genes sound alarms about this gross unnaturalness of a winter that elsewhere mirrors late-spring to early-summer.

It’s more than that.

A day’s 70 degrees in early January warns ferociously and undeniably of what’s to come:

That’s four solid months of unforgiving blazing dry summer heat, guys. Would YOU like to live in that!? You’re invited to take my seat. Take it, please!

That question’s almost impossible to answer since most folks have no concept of extreme desert heat. Reading the numbers and experiencing them are entirely different animals.

And to all you reeling in snow and ice and frigid temps, I feel ya.

I’ve lived in about every sort of climate short of the EXTREMES far north and south of the equator.

I wouldn’t exchange a fine Phoenix winter — as UNREAL and unnatural it feel — for shoveling snow, sliding across ice, a zillion car accidents and STUPID drivers, high heating bills and all the rest that spells winter.

I can only accept — this once — these mighty pleasant conditions as a well-deserved and just reward for having suffered through and survived but barely the long GOD-AWFUL heat and painfully dry 2019 summer.

Again, no “read ’em ‘n’ weep!” gloating from this quarter!

I envy ye with genuine winters, to a point.

But I do sit here shivering … not in coldness but in fear and trepidation of the abhorrent heat ahead.

Seems that shivering is as much a winter as I’ll ever enjoy in Phoenix, Arizona.

You can take the girl outta Japan but not Japan outta the girl.

I much prefer the New Year’s celebration in Japan over its American counterpart.  Though I departed my adopted home in the Far East many moons ago, I still practice some of Japan’s traditional practices externally and internally.

What Japan’s New Year’s celebration is NOT: a drunken raucous party of unhinged partiers who’ll greet Jan. 1 with a hangover, DUI and/or night in jail.

What it IS: oshogatsu, Japan’s New Year’s is called. None of the American mayhem. Three days (Jan. 1-3) of pretty solemn celebrations — to shrines and temples to offer up new year’s prayers and family gatherings. Schools and many businesses are closed. Traditional weird foods — which a majority admit they don’t like! — are prepped or purchased ahead of New Year’s and shared in homes — originally so that the cook (invariably mother/matriarch) could also enjoy time off.

Japan’s new year’s practices are fascinating and complex (and certainly more than the American version!) ; a link for the curious.

My entry into 2020 is a cultural hodgepodge.

Japanese at the core. Day 2 into 2020 and I remain in retreat, internally. I do not desire to interact with people or the world. I desire solemn space, solemn tones. I’ll come out of hibernation after Day 3, in keeping with Japan’s traditions.

Best would be if I could shut off ALL external noise but that ain’t gonna happen! Not with my tiny studio bordered on three sides by a major freeway and two major thoroughfares!

Shortly before midnight struck on New Year’s Eve, I ventured to a favorite small craft brewery — looooove me craft brews! Unable to decide from their luscious tap list of some 30 brews, I sprung for the “obvious”: #20 for 2020. XtraCitra Pale Ale by Surley brewery, loved it!

Stir in some Southern culture.

Because I now have an Instant Pot that I adore, I spent New Year’s Day concocting this Trifecta of Luck and Prosperity — replacing corn for cornbread for nutritional value.

Couldn’t say why I went the Southern route! Perhaps it was the novelty, the creativity, the adventure venturing into a mostly-unfamiliar culture.

Whatever the inspirations, it worked! 2020 opened with an amazing, flavorful, satisfying homemade meal!  With leftovers to come!

Add streams of spiced mulled wine or sparkling wine (Prosecco) with festive additions of frozen blueberries — and really, I don’t the New Year’s celebration to end!

But it shall, tomorrow. In keeping with Japan’s traditional 3 days of Serious Downtime!

Then it’s back to the grind: of Phoenix and all those ills. Ugh.

For today, though, I shall set those aside and enjoy the quietude — such as it isn’t when bordered by (1) horribly busy noisy freeway and (2) thoroughfares!

For today, I am grateful that I’ve nowhere that I MUST be.

I’m grateful for mostly quiet neighbors who enable this tiny sanctuary in the Roaring Sea of Phoenix NOISE.

I’m grateful for superb lucky Southern fare in my fridge!

And of course spirits poured into a glass. 😉

The traditional honoring and purifying kadomatsu: 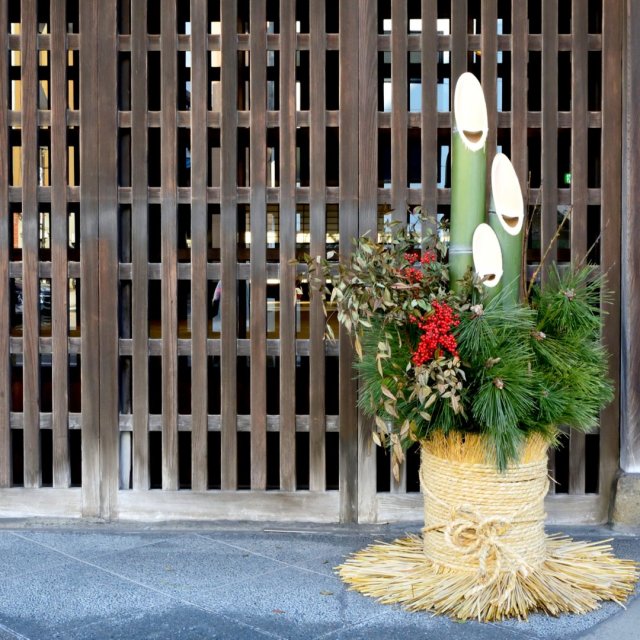 And my Southern feast ensuring prosperity and abundance in 2020 (black-eyed peas in the bowl, collard greens — both incorporating bacon — and corn): 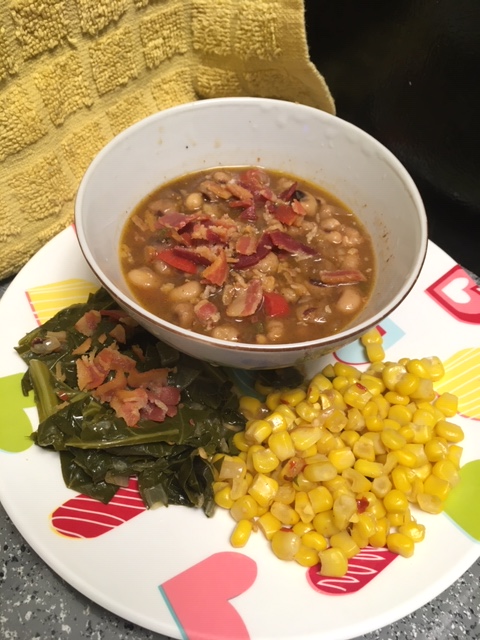