My exact words in a dialogue with a blogger after a typo I’d made at his site. Funny thing was I knew immediately after posting that I had! Yet opted not to post a correction, why?

My phone’s tiny. The smallest that Apple makes — rather, USED to make before recently discontinuing it. A crying shame for folks like me who WANT small. Who WANT a device, approximately flip-phone-size, that snuggles easily into a back pocket of jeans, front pocket of a work shirt and a palm. That topic’s neither here nor there for today.

Moreover, I’m not a texter. I’m simply not.

Neither do I do social media (beyond occasional scrollings on Twitter on the laptop). I haven’t much reason or cause to type on a tiny screen.

I’m not a speedy two-thumber. Neither do I aspire to become one. I’d go as far as to say that my interest in two-thumb typing is zip.

In a sense, I give a finger to two-thumb typing.

Seat me in front of a standard keyboard, however, and I am rarin’ to go! Like Secretariat chompin’ at his bit at the starting gate!

I love to type. Repeat. LOVE. TO TYPE.

Always have. From the second I sat at a typewriter as a little girl — a manual. A Smith-Corona, I think. Funny, I don’t remember where or whose but very probably my mother’s, which is why I’ve completely blocked it out.

What I DO remember, VERY vividly, is learning to type properly … on an ELECTRIC! Whooo-hooo those were the big new deals back then. Summer school 7th grade.

That singular class was a defining moment in my lifetime — on so many levels.

I learned the keyboard, its feel — its speedy responsiveness so very different from a manual’s.  Was, well, electrifying.

I learned, most importantly, touch-typing.

Decades ago and I still profoundly remember that class, the touch-typing exercise sheets (in a book?) resting against the stand to my left. Forcing myself away from the natural inclination to type by searching for letters instead of by touch  — which in fact is far more productive and efficient despite the initial brain response.

Training and teaching myself by focusing on random collections of letters and numbers and sentences in the exercises amid the clackclackclacking echoing in the room with some 20 students … all of us engaged in the sole purpose.

Funny thing, none of that noise bothered or distracted me. Not a bit. Funny ’cause I’m EXTREMELY sensitive to sound. Have highly-developed aural capacities and abilities. I have human dog ears and alien ears. Yet anything to do with the written word, be it writing or reading, noise fades into the background. Or merges holistically with the scenery in the case of clackclackclacking.

I had my home at a typewriter.

A deft typist am I. I won’t lie. Learning was challenging at first. Like driving. (Which, with typing, is my other huuuuuuuuuge passion.) It took work, commitment, patience, dedication and an underlying passion.

With letters, my fingers and mind fly. If typing numbers, however, I have to look, I admit. I’ve not needed to master numerical touch-typing at workplaces or felt a burning desire to do so.

When I come across a manual at a yard sale or thrift store, the wattage of that inner bulb ramps way up. Fingers, heart, soul, memory, mind gravitate.

Fingertips demand to touch, to rest upon the keys, to caress the curves of a Smith-Corona. To run the ribbon between thumb and forefinger — gently — to test for ink. To prod the lever. To tap the space bar and CAPS key. To toy with the paper guide. To breathe in the scent of a half-ring of metal letters.

It all comes racing back in cellular memory, like riding a bicycle.

None of those actions above are required on a computer keyboard. And most certainly not a cell phone.

Kids these days haven’t a clue what I’m talking about. Carriage return? Ribbon spool? Type bars? Say “platen” — one of the most beautiful, nee glorious!, words in the English language  — and they register muteness, “huh?”

Their blank expression … worse than the blank page that’s the bane of writers.

In short, I’m no texter.

I’m prone to making typos that wouldn’t occur at a standard keyboard where 10 fingers have space for flight.

I’m also far less likely to post a correction (particularly for a single typo) via phone than laptop. Believe it or not, I’ve actually produced a NEW typo rectifying one or minimally editing a comment. Ain’t worth the two-thumbing time.

You pick your battles. Especially when the battlefield is measured not in feet but fractions of an inch! 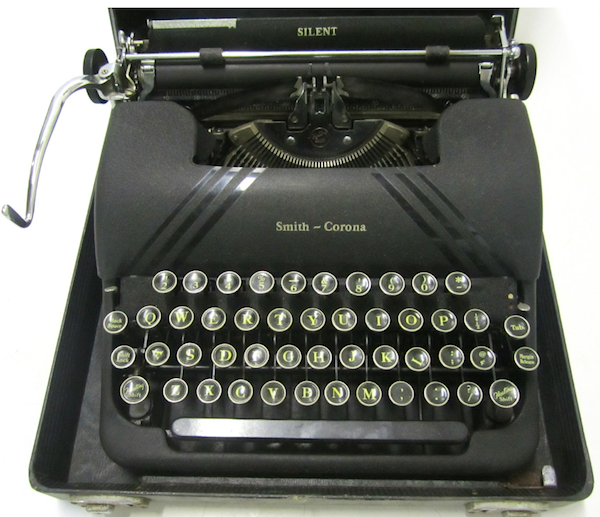 A room renter in a new subdivision.

Where it’s clear that the city sought to pack ’em in to maximize revenue and let residents battle bloodily like piranhas for the single precious commodity. The. Prized. Parking. Place.

Even San Francisco parking pales in comparison to this segment of metro Phoenix (AZ). A BOLD statement indeed. Having lived in the City decades ago before it and California swirled irretrievably down the crapper, I know of what I speak.

As comparison, for its undeniable parking arduousness, what San Francisco has in its favor is opportunity. Yes, you’ll have to drive ’round and perhaps park 8 blocks away or in an adjoining neighborhood then walk — or take Uber I guess in this culture of Laziness and technology — there IS parking to be found and it will be found with persistence.

Not so in this subdivision.

To be fair, every sardine-d condo has a garage for one, perhaps two cars depending on size. For reasons unadvertised, I’ve no garage parking access, relegating me to the roadside piranha pool.

Due to geographical logistics/layout — details unnecessary — it’s park there or nowhere.

Or at some motel.

Which is precisely what I nearly did — just a couple nights after moving in, when I was learning the lay of the land.

The Land of No Parking.

I returned early one evening to park. Found precisely: Nothing.

Round and round and up and down the same citified subdivisioned narrow roads — where two vehicles can pass barely — I went.

“God, if this is the daily norm for residents, imagine what visitors face! Imagine the holidays with umpteen friends and family visiting umpteen residents!” I shuddered at visions of 60 people vying for one spot, followed by preliminary ponderings of a personal escape route. Arizona’s vast deserts are nearby … and parking’s never a problem …

Like a tweeking hamster on a wheel I drove, round round round the same several blocks, not only on the lookout for a space but more importantly anyone walking, sitting in a car, headlights on, turning wheels, the sound of an engine … ANY possible sign that a person’s leaving.

For some 25 minutes I did this. It’s not even late! Just after 8 o’clock. On a Monday night no less!

I was not alone.

I repeatedly passed the same drivers circling on that hamster wheel in our shared relentless fruitless pursuit of that piece of paradise called a parking place. That slice of concrete of exceptional value. Only the Sunrise Ruby is more precious. It sold for more than $30 million. That’s $1.18 million per carat.

So’s you can appreciate: The Sunrise Ruby is the world’s most expensive ruby and most pricey gemstone other than diamond. It’s named after a poem by the Sufi poet Rumi.

I finally — and this is so goddamn hard to say, so very contrary to my nature — WAS FORCED. TO. GIVE. UP.

Yes indeedy, I threw in the towel, nearly input “nearby motels” into my GPS. Remember now, I’m totally maxed-out aggravated, tired, exhausted in fact, and pissed off … and as a renter I’m paying for it all, which reallly pisses me off. 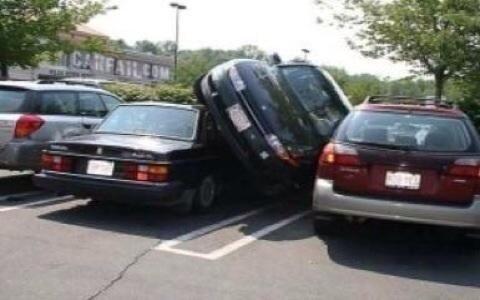 Truth told, I haven’t in me to disrespect others’ cars or my own in this way.

Fueled by dogged refusal to tack on motel costs to housing for which I already pay, I ventured afar for the sole solution. Leave the area.

So I hopped on the major thoroughfare and weaved around ’til I found something.  Something legal. Something that wouldn’t incur costs of towing and impounding, say.

Turned out to be a spot on the other side of a very busy, fast, wide and most pedestrian-unfriendly thoroughfare (not a crosswalk or signal anywhere near!) a quarter of a mile or so away.

Crossing the “mini-freeway” demands a certain finesse, precision timing and athletic prowess as if scurrying for one’s life. Because you do.

Thankfully I’m sporty and most importantly wasn’t loaded with precious goods like laptop or groceries or things to slow me. From start to finish, the endeavor to get home ate up about 45 minutes.  Niiiiiiiiiiiiiiice. 😦 😦 😦

That single night taught all I needed to know.

1. Weekdays, if you don’t arrive in a narrow window between morning (after residents go to work) and 2-3 p.m., good luck. Just as well search for the elusive snow leopard. Weekends are less predictable.

2. Wear good shoes — for a hike home and/or risky sprint across speedy thoroughfare

3. Carrying anything? Drop it off at the house first, THEN go look for parking. You may get lucky and find it in 5. Or in 25.

As a Phoenix newcomer, I need to orient, explore, meet people, hence it pains to admit that I am a Prisoner of Parking.

Worse than being a Prisoner of Love. I’ve been that too.

I do opt out of activities, curtail pleasures, avoid social engagements, postpone errands SO AS NOT TO LOSE A PARKING SPOT.

Like Friday night. Roommate asked whether I was going out. Seems I should. I am new to town, after all. I know no one except the roommate.

“NO WAY!” I shot back faster than Bruce Jenner off the starting block.

“I got a parking space!”

Short of it is, I wouldn’t wanna live in the big house. But them prisoners got a freedom I ain’t got. A freedom from parking purgatory, the 8th circle, unofficially, on Dante’s list.