I say po-tay-to, you say po-tah-to. One day we all say: Whoops! They sprouted!

Such is the fate of my potatoes. All 3 pounds in their unopened plastic bag.

I nearly toss ’em. I admit it. I steer away from food gone south.

Then, like the twice-baked potato, I think twice. Perhaps they can be salvaged in a soup if they’re not too far gone.

Or I can make a soup and if the flavor’s made hideous by the potatoes, I’ll then toss it then, comforted at least by the salvaging effort.

This original Curried Potato and Vegetable Soup recipe I found at a fav site, SimplyRecipes.com.

However, I tweak considerably, first by excluding a number of vegetables — my goal is to use up the plethora of aged potatoes without creating a batch big enough to feed an army! — then adding heat.

The spuds have become soft, the skins crinkly. I scrub away the sprouts and slice into one. The insides aren’t all mushy — a good sign that they’re still edible. There are a few decayed spots that I simply slice and toss. Yuck.

I dice around 2-1/2 pounds of russets, I think they are but don’t quote me. I love the nutritional peels so leave ’em on. Looking good. 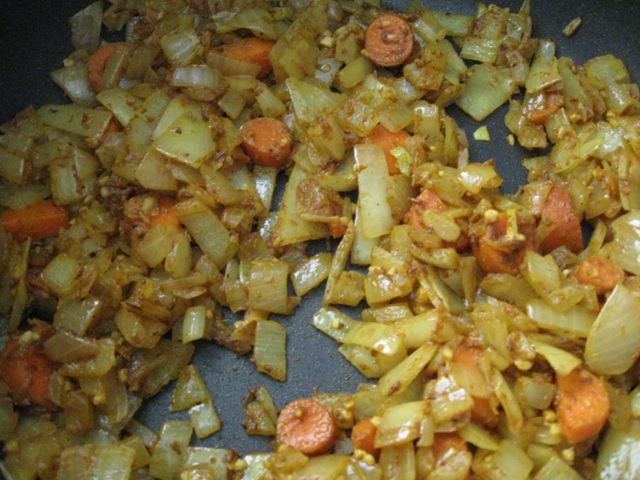 Onions, carrots and cumin seed “breaking a sweat” in a pan, not the gym

Like I’ve said before and will surely shall again (!), virtually every soup begins with the excellent Better Than Bouillon chicken stock.

A heaping spoonful into 5 cups of boiling water into the stock pot. Any quality chicken broth from a carton or can would suffice. (Tip: Avoid those salt licks passed off as bouillon cubes!)

Season with salt and pepper. (I use exclusively Himalayan or sea salt; idolized salt doesn’t hold a candle in flavor or nutrients!)

Curried potato soup in the making

Bring to a boil then simmer about 20 minutes.

I taste-test. While the turmeric — a powerhouse nutrient — and curry provide a warm earthy flavor, what’s lacking is heat. Like seriously lacking, man.

Easily remedied with 2 serrano chilies, seeds ‘n’ all, diced and stirred into the soup.

This soup’s heavy on starch. Because I’m craaaaving protein lately, I toss in a can of chunky white chicken from Costco.

While I’m a dark-meat girl through ‘n’ through, for soups, white chicken’s sometimes preferred because, like tofu, it absorbs flavors.

Another 15 minutes on a slow simmer to disperse the peppers’ heat. More taste-tests. Bingo! Those 2 lil’ serranos do the trick! The soup’s got balance and an addictive bold enticing flavor that sends me marching back for seconds.

Top with cilantro or parsley. Since I’m a fan of the hearty rustic look, I leaf, I mean leave, on the stems.

The humble aging potato is reborn into deliciousness!

To recount, my starting point is Curried Potato and Vegetable Soup recipe.

And the revised version with tweaks.

1. In a large pot (6-quart), melt butter over medium heat. Add onion, carrot and cumin seeds. Cook until onions and peppers are soft.

Funny what we remember and forget as we age.

I can’t remember whether I turned off the burner or what I came into the kitchen to do or had for dinner yesterday.

Yet I never forget that Feb. 19 is Bob’s birthday! Bob – my first serious boyfriend back in high school. Some 40 years ago.

Studies and theories of the way memory works — or doesn’t work — as we get older abound. Today’s post is not exploration thereof.

Rather, it’s simply to relay good thoughts and wishes through the stratosphere to Bob H. on this day marking his 59th revolution around the sun. Next year, the big 6-0.

I hope he is well, happy and healthy and still has that sharp wit and sense of humor that used to crack me up!

Calls at the bingo hall? Sure.

But I’m not with the gray-haireds at bingo. I’m at home counting out the Scrabble tiles.

See, — or should that be C — my old old Scrabble board is one of the delightful discoveries unearthed in a load of stuff recently relocated from long storage in Utah to my residence in Arizona.

That experience alone has 15 meaningful story lines coursing through like veins and arteries through the body. I shan’t go there. Not today.

So, Scrabble. I’ve moved so much (guesstimated 54 times) that I can’t recall where I picked up this board. Likely it was in the 1980s. Bought used from a thrift store.

Ticks me off when people donate items with parts missing or nonworking. It’s not right.

On a longtime niggling hunch, I finally sit down and count out the letter distribution. It’s printed on the board plus easily found online.

A-Z all in their rows

BTW, that tile in the middle that’s burned black? It’s’s an M. Came like that.

Not just any ol’ tiles are missing either! Not the 1-pointer common tiles. Like A. There’s nine of those. Or an O … eight of those. Players can squeak by if one of those happens to be missing.

Among the absent tiles: the letter X. There’s just one of those. Worth a hefty 8 points.

So for years, there could be, well, like, no sex in Scrabble.

And the all-important and invaluable Z. Only one of those … a whopper at 10 points! — and the highest tile value of any.

(So shame on the person who donated this board. You should’ve included a note.)

Missing letters determined, I look around for materials to make ’em.

Sure, individual Scrabble tiles can be purchased online.

But I’ve neither the time — with a game scheduled the next day — or need. If I can make something myself, I will!

Clean cardboard in the storage shed shall work. I measure meticulously and cut carefully with a box cutter, a tool well worth the expense.

With black marker, print the missing letters and their point value found online. Yey to the Internet!

Only flaw in my otherwise perfect replacement plan is the height. As you can see, the cardboard tiles, though perfectly sized to fit in the board squares, are about half the height of the proper tiles.

That can be remedied with a second layer of cardboard, glued. Or may just leave them as is. A charming quirk to an old thrift-store find. (Incomplete though it be, grrrrrr!

A Scrabble mate and I had no probs playing with the homemade tiles. Thanks to my ingenuity, “zip” and “zed” and “zoo” and “zit” and other words containing that invaluable 10-pointer Z are once again doable.